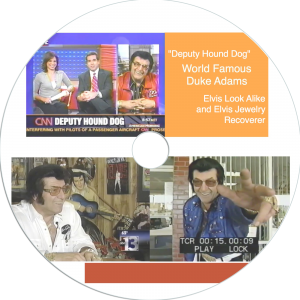 I recently had a really fun home video transfer project for a local hero. Duke Adams, an Elvis Impersonator, was in the right place at the right time and did the right thing. He helped police recover Elvis memorabilia worth hundreds of thousands of dollars. He was on both local and national news, but it was long enough ago that the copies he had of the newscasts were on VHS tapes.

The tapes were well used and showing their age and wear.  This project included editing to cut out the partial extra news stories and clean up the recordings. I was able to compile all the newscasts into one video collection with custom transitions to keep the newscast feel. He also got a digital copy, as he was just contacted by the Discovery Channel to tell his story again and he may have new video to add. The kids were so excited to meet Duke all done up like Elvis and to hear his story.  He didn’t have any photos handy for the case and disk, so I while I was editing, I was able to take screen shots to make the case and disk. I included those photos on his disk so he could print or use them.

Duke Adams loves to share his story – if you would like to know more about him he says just Google him – type “Duke Adams Elvis” and you will be able to learn all about him and his amazing story.

McBrayer Studios provided their event videography and event photography services for Hollywood Kids Academy for the Performing Arts (HKA), a Las Vegas valley based youth theater company with three valley locations.  HKA teaches children and youth from preschool age through high school the various aspects of theater, both on stage including acting, choreography, and vocal;…

We are now booking for portrait sessions!  Whether you are looking for an individual session or the whole family, we are here to capture that special moment…  Contact DeAnna to book your session and discuss the perfect location (on location in the Las Vegas valley or in our studio).  We look forward to capturing your…

McBrayer Studios recently finished the DVD sets for Discovery Charter Schools production of Beat By Beat Press‘ We Are Monsters musical. We provided a full version of the show, plus photos we took of the show. We have uploaded some of the videos to our YouTube page – McBrayer Studios YouTube… Check them out to…

McBrayer Studios is providing a variety of services for the upcoming spring concert for the Clark County Children’s Choir – http://www.clarkcountychildrenschoir.org – at UNLV’s Artemus W. Ham Hall on Saturday, May 18, 2013, 7:00pm. We provided graphic services for the promotional poster.  We also provided t-shirts for the various children’s choirs performing at the event, with a…

ZYSC – https://www.zionsyouth.org/ – is having their first even live stream event Saturday March 12, 2021 at 3:00pm.  They will be performing several numbers with special guest conductor Dr. Ryan Murphy from the Tabernacle Choir at Temple Square.  The video will be available on their website.  We love working with this talented group of young…