McBrayer Studios is located in Las Vegas, Nevada, one of the most exciting and interesting cities in the world – “the entertainment capital of the world“.  Las Vegas is truly a unique location like no other and is the backdrop for a variety of events, destinations, and architecture.  It is a fitting place for McBrayer Studios to provide the variety of services we offer.  While we do a majority of our work in the Las Vegas valley, with the connected world we live in, we are also able to provide various services outside of the Las Vegas valley.

McBrayer Studios has “officially” been around since 2012, DeAnna and Todd McBrayer have been partners working side by side providing a variety of services in our personal and professional lives for decades.  Whether providing video and graphics services to the Clark County Children’s Choir, assisting Discovery Charter School with their initial marketing efforts including banners and posters, numerous photo and video shoots, and many other ways to share the talents and abilities we have been blessed with and developed over the past few decades of service to others.

Personally, Todd and DeAnna McBrayer have been partners since 1994, getting married in 1994 in Las Vegas, Nevada (at the Las Vegas Nevada LDS Temple), even though they lived in St. George, Utah at the time.  Little did they know they would relocate to Las Vegas, Nevada in 1997 for better employment opportunities for Todd.  Starting with a small family in 1996 their family has grown to 9 children, both through the joys of birth (5 of them) between 1996 – 2003, but also through the blessing of adoption (4) in 2011.  Having 9 children does keep things interesting, but also allows them to share their talents and abilities, including some potential future careers for their children.  Jarrett is interested in photography (see is own page) and often assists Todd as his PA (photographer assistant).  Lissy assists with many of the videography projects DeAnna completes, working side by side with DeAnna as a camera operator.  She even has edited her own video shoot she completed for a show at Las Vegas Academy.

In addition to be a dad to his 9 children, Todd, who grew up in Lake Havasu City, Arizona, is interested in photography, running, outdoors, scouting, NASCAR, architecture, and all things Apple.  DeAnna, raised in American Fork, Utah, keeps busy with her 9 children, but also is interested in education, videography, outdoors, and also all the things Apple.  We are excited to share our talents and abilities with our clients, friends, and children, making the lives of all we come in contact with better.  Todd and DeAnna are also active in their church and community. 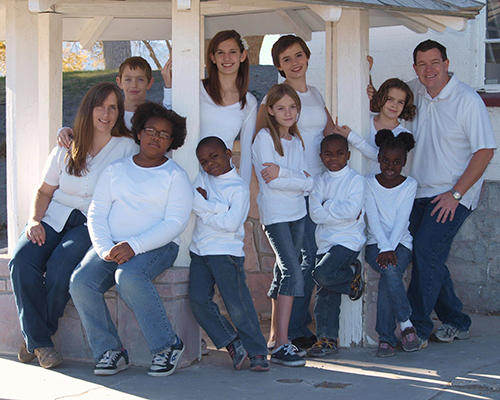